High Build Stencils – How to guide

How to Create High build stencils

Looking to give your designs the edge with a 3D raised look or wanting to add some texture to your designs? High build stencils are also used extensively when printing circuit boards, applying varnishes to give a raised feel and for applications such as non-slip socks. Then you will need know how to create a high build stencil.

You have a couple of options, you can use direct emulsion and build up the coats or you can use a capillary film – which is a sheet already coated with an emulsion. In this article we are using Chromaline Phat Film which is the quickest and easiest way to create the high build stencil.

Phat Film comes in various sizes giving a stencil depth from 100 – 700 microns, in this article we are using 200 micron film, to give you some comparison a 43T mesh screen with a coat on both squeegee and print side will give you stencil depth of around 25 microns.

So to get the same stencil depth as a 200 micron film, that works out that you would need at least 9 – 10 coats of emulsion which needs to be applied when the screen has dried, which equals lots of work and lots of time (over a day to prepare one screen!). Also to get consistent coats is difficult and there is always a risk that another emulsion coat which be added to a coat which has not completely dried which reduces light sensitively and can lead to premature stencil failure.

How did we do it?

We printed out our film positive as per normal, we are using an Epson 1500W with Blacquer Ink – it is really important that the artwork is as dark as possible. Hold your positive up to the light and if you can see the light through the artwork then print 2 copies out and stick them together with invisible tape. TIP – you can print one of the copies out in Red, which is a colour which blocks UV light. PHAT film is coated in a Photopolymer emulsion which is fast exposing but you need to be as accurate with exposure timings as much as possible.

Degrease your screen as per normal using a degreaser and power hose. In this article we are using a 32T screen. It is best to use low mesh count screens when using high build stencils. Make sure your screen is completely free of grease and dirt. 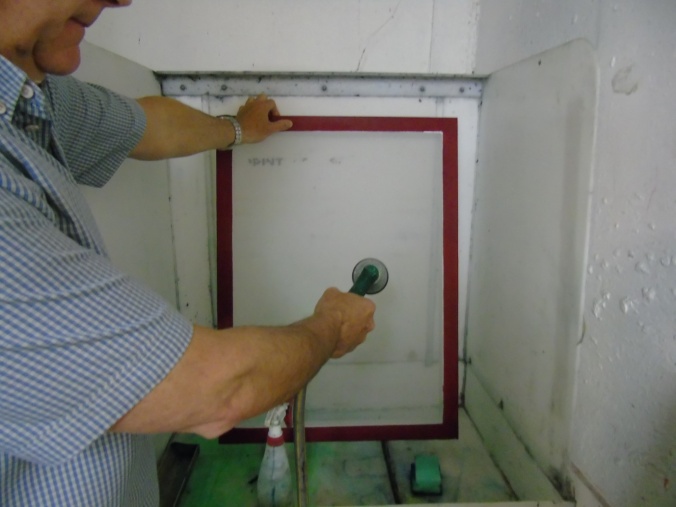 We use a standard dual cure emulsion to laminate the PHAT film onto the mesh. We performed the steps in sub dued light.
Remove the cover sheet of the PHAT film.

Place the screen print side down onto the PHAT film, we are lucky enough to have a clean platen to rest on otherwise use a table (make sure the surface is clean and free of any dust).

Put some blocking tape squeegee side of the screen around the edges of the film. We will need to laminate the PHAT film to the mesh using a dual cure emulsion, you can pretty much use any dual cure emulsion – in this article we are using Macdermid Autosol 5000 which was already sensitised and ready to go. We poured a ridge of emulsion onto the taped area of the mesh.

We then used a squeegee (Medium 75 green are perfect for this) to cover the PHAT film. Use the same pressure as if you were flooding the screen. You will likely have to coat 4 times using the squeegee – if you can hear the squeegee rub on the mesh it means you need more coats of emulsion.

Put any excess emulsion back in the pot.

Put the screen in your drying cabinet. Make sure the emulsion is completely dry before moving to the next step.

Peel off the thicker release sheet (if the release sheet puts up some resistance then leave the screen to dry for a little longer) then try again. After you have removed the sheet then put the screen back in the drying cabinet for 5 mins or so.

Exposing the artwork
Align the film positive to the PHAT film 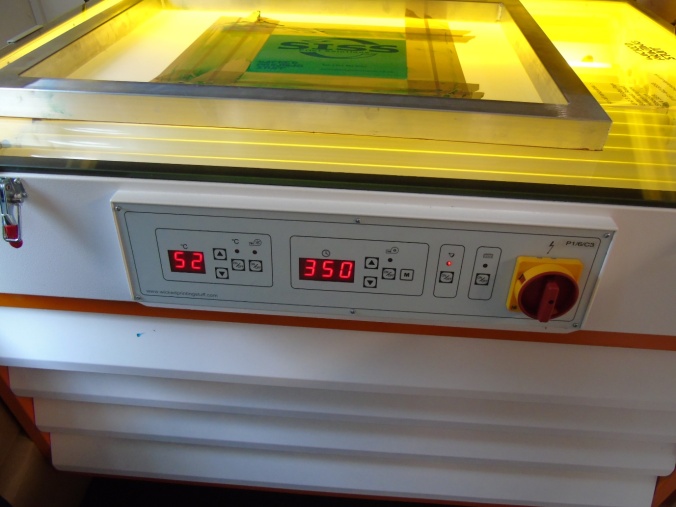 We then exposed the screen for 350 seconds, we are using a WPS Mini Exposure Unit (uses actinic tubes) with built in drying cabinet. We are using a 200 micron film so you will need to adjust the timings of your exposure unit based on the bulb strength, type of bulb and thickness of the film.

Washing out the Stencil
After the screen has completed the exposure time then we are ready to wash out the stencil. The best way to do this is to prepare some hot water (hot bath temperature). Use a sponge, dip it in the hot water and gently rub the stencil. If you don’t use hot water you could spend 10 minutes or more trying to washout the stencil using the power hose by itself.

When the stencil is clear, use the power hose (or power washer on low pressure) to wash off any residue. Remove the blocking tape. Give the squeegee side a spray and start to remove the blocking tape, don’t be surprised to see some evidence of emulsion run off suggesting under exposure. Don’t worry this is normal but make sure you give it a good enough wash squeegee side to make sure there is no emulsion residue in the Stencil.

The screen is now ready to go in the drying cabinet. Don’t worry if you see any blisters around the edges of the film – this is because the light has not gone through the blocking tape. If there is blistering across the film then the film is underexposed.

When the screen is completely dry we are now ready to apply blocking tape to uncovered areas of the screen. As an option when you are laminate the PHAT film with emulsion you could cover up the rest of the screen – in this article we have used blocking tape.

Printing
We are using WPS Premium Cotton White Ink and a 65 Blade (Red) Squeegee – softer the blade the better as we need to get plenty of ink to flood into the stencil. We double flooded the stencil prior to printing.

To increase the opacity and depth of the print, we printed out the stencil – flash dried the ink and double flooded the stencil again and printed again. (AKA Print – Flash – Print)

Important – with a high build print, there is a lot of ink on the garment. You will need to increase the curing time to ensure of the ink is completely cured. 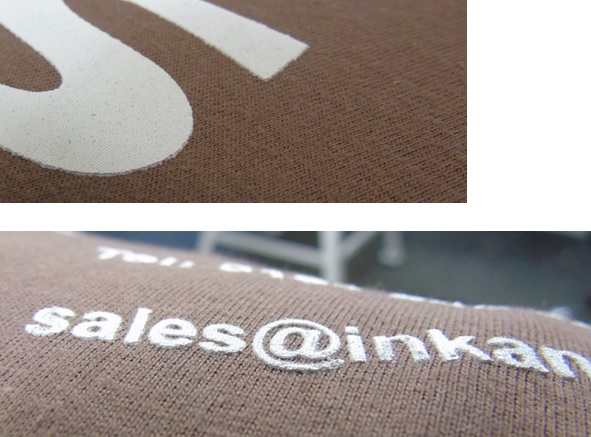 What do you need to create a High Density Stencil?

We used the following equipment and consumables:-

Autosol 5000 Dual Cure Emulsion (laminate the film onto the mesh)]

WPS 6 colour 6 station carousel
We used a Hot Air Gun to touch try the ink instead of a flash dryer and we used a Heat Press for curing – if printing a production run we would use a tunnel dryer.